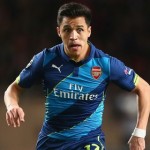 Reports are out claiming that QPR wing-back Mauricio Isla says Arsenal attacker Alexis Sanchez is due to become the best player in the world.

Isla is on a season-long loan deal at Loftus Road from Juventus after impressing for Chile at last summer’s World Cup.

“I have known him for ten years and I think Alexis has shown what he is made of,” said Isla. “He has always said that he wanted to be the best in the world and now he has arrived in a team where this can truly become a reality.

“He can build confidence and where they play for him and he transmits the confidence that his teammates give him but honestly, I am not at all surprised by the quality of Alexis as a player.

“Alexis Sanchez is a leader as are the other two. Of course, the team is a group but there are always role models in any team and I think these three in particular are fundamental to ours.

“There are always high quality players and these three are the pillars of our team and the rest of us must accompany them to achieve great things.

“Firstly Alexis Sanchez provides what I believe we lacked before which are his goals.

“It’s fantastic that he is scoring so much which fills him with confidence and joy and I hope he continues to keep scoring always more.”