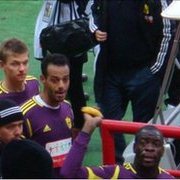 Anzhi Makhachkala defender Chris Samba was the latest victim of racist abuse in Russia when a banana was thrown at him on the weekend.

The former Blackburn Rovers star was the target of the racial slur when he was departing the pitch in his side’s 1-0 loss at Lokomotiv Moscow and it left him disappointed.

A spokesperson from Anzhi confirmed the incident: “A banana came down at Samba from the VIP section, as the teams were leaving the field. Who threw it is unknown. Samba picked up the banana and threw it back. In our opinion this was the best and most appropriate response to those responsible.”