It has been reported that Manchester United striker Radamel Falcao has no regrets over his move from AS Monaco. 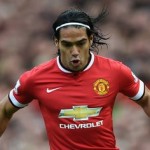 The Colombian international striker admits there was a lot of talk about Real Madrid, but is happy with his switch to Old Trafford.

“During the summer there was much talk of Real Madrid, but United came in for me and I’m happy to be here .The Premier league is a very competitive,” Falcao told Radio Onda Cero.

“The last year was very difficult, but the injury helped me to mature. Living in Manchester, I’m comfortable and I hope to stay here many years.”