It has been reported that Radamel Falcao could be set to leave Chelsea this winter. 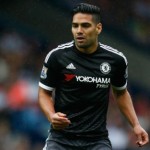 According to The Mirror, the Colombian international striker is fed up with a lack of first-team opportunities under Jose Mourinho and is keen to leave Stamford Bridge in January.

29-year-old Falcao arrived on a season-long loan from AS Monaco this past summer following a subpar spell at Manchester United last season but is ready to end his West London nightmare.

Despite being fully fit, Falcao was not even on the bench for Saturday’s 2-0 win over Aston Villa which according to reports was the last straw for the former FC Porto and Atletico Madrid superstar