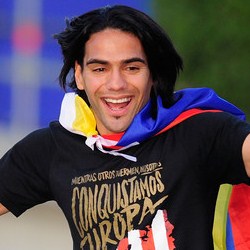 Atletico Madrid striker Radamel Falcao is definitely one of the top ten strikers in the world right now. The 26 year old Colombian international has been in top form for club and country in recent times.

Falcao started his career with River Plate where he scored a total of 49 goals in 110 appearance. His fine goalscoring form attracted the interest of Portuguese giants Porto.

In 2009 Falcao joined FC Porto for a modest fee of €3.93 million. Falcao truly made his mark in Europe with FC Porto where he scored an amazing 72 goals in 87 appearance.

Falcao’s goalscoring prowess attracted the interest from clubs all across Europe but on the 18th of August 2011, Atletico Madrid clinched the signing of Falcao for an estimated fee of €40 million.

Transferring to an entirely new league did not slow down Falcao. His his debut season with Atletico, Falcao scored an amazing 36 goals in 50 appearance, the highest amount by any player in a first season playing for Atletico Madrid.

Falcao was also the top goal scorer in a Europa league and became the first player in history to win two consecutive Europa League/Uefa Cup titles with two different teams.

Falcao’s goalscoring feat has attracted the interest of one of the biggest football club in the world, Real Madrid. Premier League giants Chelsea have also expressed their interest in signing the prolific goalscorer but Atletico Madrid president Enrique Cerezo recently declared that the club will not be selling their prized asset.

Whatever the case may be, and as long as he stays fit and injury free, Falcao will continue banging in the goals for Atletico Madrid and continue to entertains fans from all over the world.