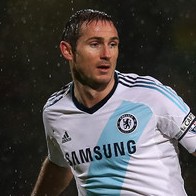 It has been reported that Chelsea manager Rafa Benitez was reluctant to discuss Frank Lampard’s future after victory at Everton.

Having gone behind to Steven Pienaar’s effort barely two minutes into the game Lampard pulled his side up to third place with goals either side of half-time.

Benitez said: “Lampard is a great player, a good professional, who is doing well for us and I will try to bring the best out of him until the end of the season.

“He is one of the players who if he gets in the box he can be dangerous.

“He is under contract. He has shown his full commitment. He is a great player and my job is to keep him fit, happy and scoring goals.

“If he can score goals every game I’ll be pleased.” Jose Mourinho Taunts Man Utd: I Had To REJECT Di Maria And Falcao