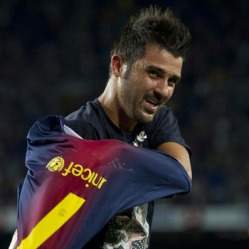 Reports are out claiming that Chelsea are joining the Premier League scramble for Barcelona striker David Villa.

The Sun revealed that Chelsea will offer the Nou Camp giants £12million for the World Cup winner next month.

The Blues’ move could spark a four-way battle with Manchester City, Liverpool and Arsenal when the transfer window opens. But manager Rafa Benitez believes the chance for Villa to play alongside his pal Fernando Torres will tip the balance in Chelsea’s favour.

Spaniard Villa has previously admitted: “Fernando and me get on well on and off the pitch. We complement each other and work well together.”