It has been reported that Manchester United fullback Rafael was happy to be part of their victory over West Ham United. 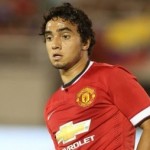 Louis van Gaal’s team held on to a 2-1 lead after a late West Ham barrage at Old Trafford.

Wayne Rooney saw red for a petulant kick on Stewart Downing and Rafael would have been having visions of throwing away the lead like they did against Leicester.

The Brazilian said: “In the first half we played brilliant football and could have scored more goals. That’s the way we need to play.

“Finally I can sleep. After last week’s loss I couldn’t sleep.”