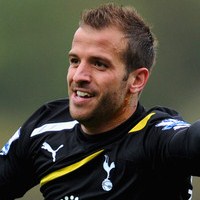 “We thought he had a hamstring. He went for a scan and it didn’t show a tear.

“I think he probably had a bit of cramp in there where he’s had a problem before, a bit of tightness he felt maybe might go, so he took the precaution of not playing on with it.”

Van der Vaart, who trained today and will do so again tomorrow, added: “I think I’m going to be fine.”