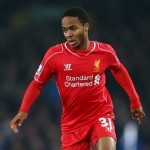 The Reds go to Turkey defending a 1-0 lead.

“I think it’s going to be a really difficult game,” said Sterling.

“Coming away to play in Turkey, it’s going to be difficult and we know that. We’ve got to stick to our gameplan that the manager has set out for us. That’s no different for tomorrow night.

“We’ll be trying to play possession football and try to play really attacking football at the same time. I think it should be a really good game and hopefully we can just play the football that we know we can play.”