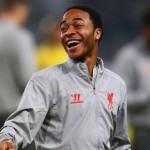 According to reports from Sky Sports, Raheem Sterling will not discuss his future at Liverpool until the end of the season.

A source close to the England forward says any talks over a new deal are on hold until the summer but insists the 20-year-old remains ‘100 per cent committed to the club’.

The England international’s contract runs out at the end of next season.