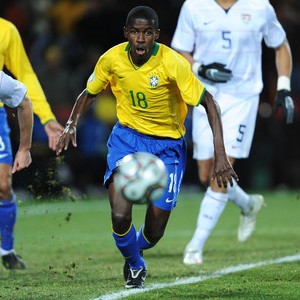 Benfica and Premier League champions Chelsea FC have come to an agreement over the price of Brazilian international midfielder Ramires.

After days of negotiations for the player, both clubs have agreed a fee of €22 million (£18.2 million), subject to contract negotiations and the completion of further medical tests.

The deal was announced through a statement on the website of the Portuguese Securities Market Commission.

It read: ”Benfica, in compliance with Article 248, of the Portuguese Securities Market Commission, hereby inform that they have reached a agreement in principle with Chelsea FC for the transfer, on a permanent basis, of the sporting and economic rights of the professional footballer Ramires Santos do Nascimento for the value of 22 million euros.

”They also inform that the said transfer agreement will be formalised once the athlete completes the medical examinations which he will undergo, with the consent of Benfica, and it will be concluded with the signing of a contract of employment between the aforementioned athlete and Chelsea FC.”

Ancelotti : Pato Will Not Come To Chelsea