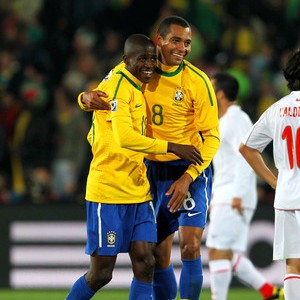 It is said that the Brazilian was in two minds about leaving Benfica for the Premier League champions but the former Gunners, his World Cup team-mates, told him England was right for him.

Midfielder Ramires, now age 23, said: “Gilberto, Julio Baptista and others gave me confidence by insisting I must accept this chance.

“In the end the Chelsea proposition was impossible to reject – not just because of the money but the chance to spend every day at one of the best clubs in the world.

“As a boy in Brazil I watched the Premier League and I remember how Chelsea and Manchester United played such attractive football.

“This summer has been a dream – the Portuguese title with Benfica, the call of Brazil, the World Cup and now the jump into the Premier League.”