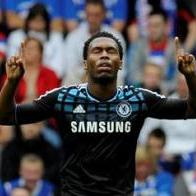 Daniel Sturridge’s first-half double helped Chelsea to a comfortable 3-1victory over Rangers in their friendly match at Ibrox.

Light Blues’ striker Nikica Jelavic headed the Scottish champions into the lead after six minutes after being set up by Steven Naismith. However, Sturridge – who spent the second half of last season on loan to Bolton – struck twice to give the classy Londoners an interval lead which they never looked like surrendering.

Substitute Florent Malouda, who had replaced Sturridge on the hour mark, headed in Chelsea’s third in the 72nd minute. The scoreline could have been worse for the home side had substitute goalkeeper Neil Alexander, on for Allan McGregor at the interval, not saved Frank Lampard’s penalty two minutes later.