Reports are out claiming that Leicester City manager Claudio Ranieri has stated that he is not losing sleep over Real Madrid’s reported interest in Jamie Vardy. 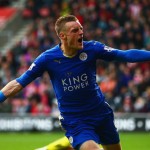 Vardy has made a stunning start to his Premier League campaign so far, scoring 10 goals in as many matches and as a result, it has been no surprise to see the striker attracting the interest of a host of clubs.

Recently, it was reported that even Spanish giants Real Madrid were interested in signing Vardy but Leicester boss Ranieri is not getting overly concerned by the speculation surrounding his star man.

Ranieri said: “He is happy with us, he’s happy with his contract and that’s important. Maybe [we’ll look at it] at the end of the season, with a lot of goals scored.

“Speculation is good because football is speculation but it’s important me and my players are very focused about the pitch.

“Not many teams can buy him now. He is very happy here and we don’t want to sell him, it’s clear. When I look at him he feels good and that’s important.”

Jose Mourinho Dropped Pedro Leon For Getting Too Cocky