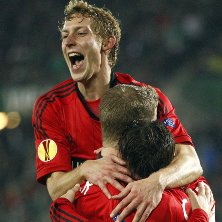 Bayer Leverkusen retained top spot in Group K of the Europa League with a convincing 4-0 victory over struggling Rapid Vienna at the Ernst Happel Stadion.

Philipp Wollscheid gave the German outfit a half-time lead and then two goals in three minutes just before the hour mark from Gonzalo Castro and Karim Bellarabi ended the match as a contest.

Castro then notched his second in stoppage time to put the icing on a victory that lifts Leverkusen on to seven points and keeps them narrowly ahead of Metalist Kharkiv in Group K.

Rapid, meanwhile, are still rock-bottom and searching for their first point after suffering a third successive defeat.