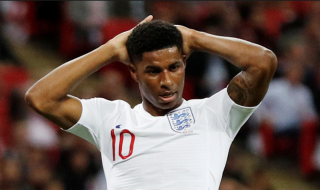 Marcus Rashford is the latest Manchester United player to return to the club from international duty.

England manager Gareth Southgate confirmed that Rashford had returned to Old Trafford with an ankle injury.

Rashford had earlier trained alone on Thursday ahead of England’s Euro 2020 qualifier with Czech Republic, and he now returns to United to be assessed by club doctors.

An earlier report on Thursday had claimed Rashford’s injury problem was picked up in United’s Premier League draw with Liverpool, but the striker has played in four matches since then for his club.

Southgate told the press on Thursday: “He’s been with our medical team all week and tried to take part in training.

“It’s clear he’s not going to be ready for our matches so we’ll send him back to the club and he’s out of our two games.