Real Madrid legend Raul insists that other clubs in the world would be in pursuit of Tottenham’s Gareth Bale if they could afford him. 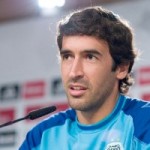 The Welsh international winger is the subject of a bid in excess of £90million from the Spanish giants and Raul has backed his former club to complete the deal so they can acquire one of the world’s best few players.

The 36 year old told Marca : “He’s a dominating player, makes a difference and behind Cristiano and [Lionel] Messi is a player who comes with drive,”.

“All clubs would like to have him in their ranks. It seems that Real Madrid is going to make a big effort and if so everyone in Madrid will be happy and will enjoy a lot of his game.”