It has been reported that Ray Parlour is eager to see Arsenal clinch the signing of Real Madrid midfielder Sami Khedira. 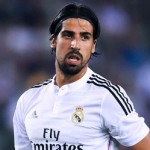 It is said that Parlour is desperate to see Germany ace Khedira, 27, in a Gunners shirt and says the Real ­enforcer would be ­ideal for Arsenal’s frail midfield.

He said: “Khedira is a quality player who has played in big games for club and country and if there is a chance to get him in, great.

“Arsenal do seem to miss a Patrick Vieira type of player who can control the midfield. It is an area which Wenger must look to improve and he has the January transfer window to do so.

“Certainly a player of his calibre would be a brilliant signing. They ­definitely need a holding player as well as ­another central defender in the window.”