Reports are out claiming that Saint-Etienne midfielder Rayan Souici is set to disappoint Premier League sides Arsenal and Liverpool as Red Bull Salzburg have reportedly made an official move. 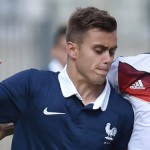 According to French news site Eurosport, Red Bull’s sporting director Gerrard Houllier is currently in the midst of negotiations with Saint-Etienne officials and could conclude a deal very soon.

Arsenal and Liverpool had both previously been linked to the Frenchman and may use this news as as a chance to formalise their interest before it’s too late. A Lot More To Come From Ramsey! – Arsene Wenger