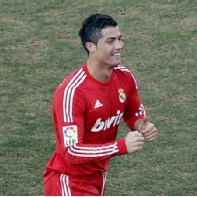 Piti struck the post and Michu was denied by a last-ditch tackle by Sergio Ramos in the first half but, for all the hosts’ pressing, it was the visitors who took the lead early in the second period as Ronaldo skilfully backheeled in from 10 yards after Rayo had failed to clear Mesut Ozil’s corner.

Michu missed another great chance when he blazed over after being played in by Diego Costa, and his day was summed up two minutes from time when he was sent off for a tackle from behind on Sami Khedira.