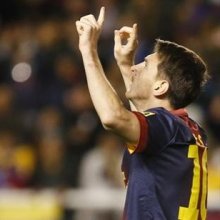 Lionel Messi was once again Barcelona’s inspiration as they underlined their Primera Division title credentials with a thumping 5-0 win over Rayo Vallecano.

Messi scored twice to take his tally for the calendar year to a hardly believable 73 as Barca, who struggled to see off Celtic in the Champions League in midweek, ran riot at the Campo de Futbol de Vallecas.

It was not as comfortable for the visitors as the comprehensive scoreline suggested, however, and it was Rayo who looked more likely to score before David Villa broke the deadlock in the 20th minute.

Messi grabbed the second just after the interval and three goals in the final 12 minutes – from Xavi, Cesc Fabregas and Messi again – flattered Tito Vilanova’s men, who have picked up 25 points from an available 27 so far this season.