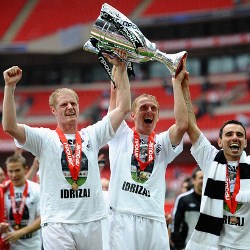 Swansea City became the first Welsh team to reach the Premier League since the competition’s inception in 1992 after a hat-trick from Scott Sinclair inspired them to a wonderfully entertaining 4-2 win over Reading in the Championship play-off final at Wembley.

Swans boss Brendan Rodgers emulated John Toshack by securing the club’s first promotion to the top flight since 1981, ending the hopes of the club he represented for 14 years as a player, coach and manager prior to his dismissal at the Madejski Stadium last season.

Sinclair scored twice in the first half, once from a penalty, and Stephen Dobbie added a third as the team that finished third in the table opened up what looked to be an unassailable lead. But Reading’s brilliant start to the second half made this a spectacle to rival that of the Champions League final which was played at the same stadium just two days previously.

An own goal from Joe Allen and a towering header from Matt Mills brought Reading firmly back into contention, before Jem Karacan struck the foot of the post and Garry Monk produced an incredible block to deny Noel Hunt scoring from the rebound. However, Swansea’s nerves were finally settled on 80 minutes when Sinclair scored his second penalty of a dramatic afternoon.