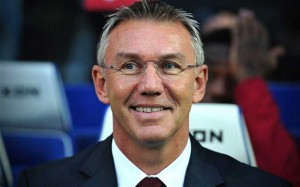 Nigel Adkins has been named as the new manager of Reading after talks with owner Anton Zingarevich.
The Royals called a press conference for 9.15am this morning at the Madejski Stadium, when the former Southampton manager will be unveiled.

The appointment of Adkins ends Reading’s search for a new leader after the sacking of Brian McDermott.
Adkins himself was axed by the Saints in January but has remained on gardening leave after failing to finalise a severance package on the three years left of his contract.

Reading are seven points adrift of safety and are second bottom of the Premier League, with eight games left.
Adkins, 48, led Southampton to back-to-back promotions before being sacked in January and has previously managed at Bangor City and Scunthorpe United.

After a trip to Arsenal’s Emirates Stadium on Saturday, Adkins’s first home game in charge will be against his former employers, Southampton.