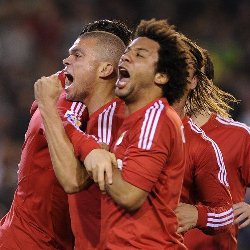 A brace from Cristiano Ronaldo fired Real Madrid to a 3-2 win over Real Betis in a fantastic Liga match in Seville, although Jose Mourinho’s side escaped two penalty appeals when their players appeared to handball.

A barn-storming match wowed a packed Estadio Benito Villamarin as both sides threw caution to the wind, playing the typical Spanish game at a breakneck English tempo.

Jorge Molina put the hosts ahead before Gonzalo Higuain levelled in a thrilling first half; it got even better for the neutral as, after Ronaldo’s first, Jefferson Montero equalised.

But Ronaldo got his second and Real’s third with 17 minutes left, thrashing home a savage finish after Fabricio did well to save Sergio Ramos’s header.

There was controversy though as both Xabi Alonso and – deep into injury time – Ramos appeared to handle in the box, the substitute referee waving appeals away.