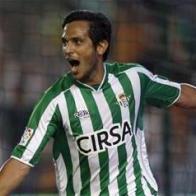 Promoted Real Betis surged to the top of La Liga after hanging on to beat Real Zaragoza 4-3 despite playing with 10 men for the last 21 minutes of a thrilling La Liga clash at the Estadio Benito Villamarin.

Paraguay striker Roque Santa Cruz scored twice as the hosts raced into a 4-1 lead before a foolish red card for keeper Casto Espinosa sparked a Zaragoza fightback in the second half.

The Seville-based club, who have spent the last two years in the second division, are the only side with a 100 per cent record this season and have a two-point lead over Valencia after four matches.

Malaga are three points off the pace in third spot, one point ahead of champions Barcelona, Sevilla and Levante.

Barca drew 2-2 at Valencia on Wednesday, the same day as seventh-placed Real Madrid were held 0-0 at Racing Santander.