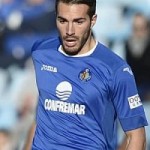 Real Betis have announced the capture of midfielder Xavi Torres from Getafe on a four-year contract.

Betis boss Pepe Mel has been searching for a playmaker for some time, although Torres’ name was not one that appeared on a long list of candidates for the position.

However, club President Miguel Guillen claimed this week that a signing was imminent and he has been true to his word with the acquisition of the former Barcelona, Malaga and Levante player [pictured, left].

The 26-year-old, who came through the youth system with Villarreal but never played a first team game, has appeared in 117 top-flight games and scored six goals.

Last term he featured in 37 League and Cup games for Getafe, almost all of them in the starting line-up.

Play the world’s most challenging fantasy football game by selecting players from Europe’s top five leagues and competing for prizes.