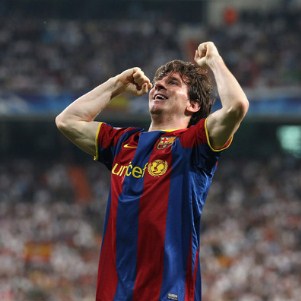 Lionel Messi swooped twice to give Barcelona a 2-0 win in a bad-tempered first leg of their Champions League semi-final against 10-man Real Madrid at the Bernabeu.

The World Player of the Year guided the ball home at the near post with 14 minutes remaining to break the deadlock before he reverted from poacher to his usual creative self for the second on 87 minutes, a wonderful individual effort that saw him dance through the Madrid defence and finish past Iker Casillas.

The Argentine’s match-winning brace – his 16th and 17th goals in his last 16 appearances in the competition – gives his side a clear advantage heading into the second leg at the Camp Nou next week.

Madrid will be missing midfielder Pepe for that game after the Portuguese received his marching orders for a studs-up challenge on Dani Alves after just over an hour of play.

Barca also had a man sent off, substitute goalkeeper Jose Pinto, following an unsavoury scuffle as the teams headed down the tunnel at half-time, while Madrid coach Jose Mourinho was sent to the stands for his sarcastic protestations in the aftermath of Pepe’s dismissal.