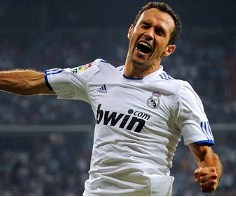 Jose Mourinho enjoyed a winning home debut as Real Madrid got their Primera Division campaign up and running with a narrow victory over Osasuna.

Centre-back Ricardo Carvalho netted the only goal of the game just after half-time to give Madrid the spoils in a match they dominated but struggled to finish off a battling Osasuna side.

The result lifts Madrid onto four points after Mourinho, who has not lost a home match in eight years during his time at Porto, Chelsea and Inter Milan, saw his side held goalless at Real Mallorca in their season-opener a fortnight ago.

It also lifts them one point above arch-rivals Barcelona, who suffered a shock 2-0 home defeat to promoted Hercules earlier this evening.