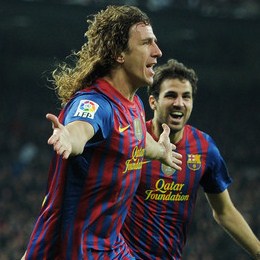 Barcelona are well placed to reach the semi-finals of the Copa del Rey after they beat old rivals Real Madrid 2-1 in the first leg of their Copa del Rey quarter-final tie at the Estadio Santiago Bernabeu.

Cristiano Ronaldo gave the defending champions the lead after 11 minutes, but second-half goals from Carles Puyol and Eric Abidal mean Barca will feel confident of avenging their defeat to Real in last season’s final when they play the second leg at the Camp Nou next week.

It was the third time Barca had beaten Real already this season, following victory in the second leg of the season-opening Super Copa and then a 3-1 win at the Bernabeu in their first league clash of the campaign back in November.