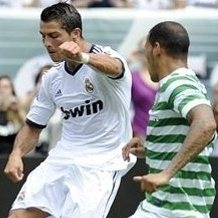 Real Madrid beat Scottish champions Celtic 2-0 in the final game of their American tour thanks to two goals from Jose Callejon and Karim Benzema.

Callejon impressed early on as he went close after good work from Cristiano Ronaldo down the left wing and Real peppered Lukasz Zaluska’s goal with efforts soon after as Ronaldo and Kaka went close.

The Spanish champions eventually took the lead as Gonzalo Higuain’s shot was saved, but Callejon followed up and netted the rebound. Minutes later, Higuain almost got on the scoresheet himself but his header floated over.

Celtic were rarely in the game before the half, but went close through Joe Ledley and after the break it was more of the same as Real ran riot but missed chances through Karim Benzema and Esteban Granero.

However, the lead was doubled as Ozil found Benzema free on the left wing and the striker raced through on goal to net past Zaluska. I’ll Be 100% For The Champions League Final – Cristiano Ronaldo