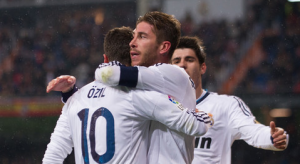 Young striker Alvaro Morata put Madrid ahead in just the third minute. Ramos doubled the advantage with a header in the 12th, but the Spain defender then left the hosts with 10 men in the 18th after picking up two bookings in a two-minute span.

Madrid’s win kept it in third place, four points behind Atletico Madrid after it won 3-0 at Valladolid. Barcelona leads Atletico by 12 points at the top of the table with the league almost two-thirds through.