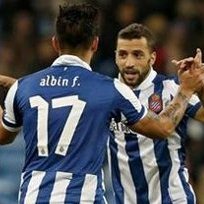 Juan Albin’s late equaliser struck another blow to Real Madrid’s hopes of retaining their Primera Division title as they could only draw 2-2 with Espanyol at the Santiago Bernabeu.

Sergio Garcia had given the visitors a deserved lead on the half-hour but Madrid appeared to be heading for victory as goals form Cristiano Ronaldo and Fabio Coentrao either side of half-time put them in front.

However, after missing a host of chances to put the Catalans away, Jose Mourinho’s men were punished two minutes from time as Albin turned the ball past Iker Casillas from close range.

The point extends Madrid’s unbeaten record at home this season to 12 games but they were left to rue a lacklustre first-half performance and a profligate one after the break.