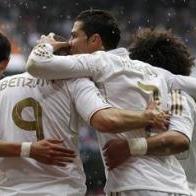 Karim Benzema struck twice as Real Madrid moved to within touching distance of their first Liga title since 2008 after a 3-0 win over Sevilla at the Bernabeu.

Cristiano Ronaldo gave Los Blancos a 19th-minute lead when he cut on to his right foot and drilled in his 43rd league goal of the season.

Sevilla missed a host of first-half chances, with Jose Antonio Reyes guilty of the worst of them.

And Sevilla were dealt a blow early in the second half when Coke’s clearance ricocheted in off Benzema for Real Madrid’s second.

But there was no doubt about Benzema’s second, his 31st league goal of the season, as he met Sergio Ramos’s cross with a diving header – meaning Barcelona must avoid defeat at Rayo Vallecano later on Sunday to prevent Real being crowned champions.

Adebayor : It Is A Dream Come True To Play For Real Madrid Mourinho : Cristiano Ronaldo Will Be Fit For Lyon