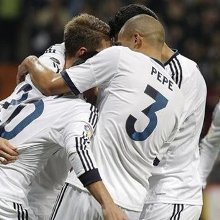 Real Madrid moved into third place and handed Jose Mourinho his 100th win in charge of Los Blancos with a 4-0 victory over Real Zaragoza.

Gonzalo Higuain and Angel Di Maria put the hosts in a commanding position with a goal apiece in a two-minute spell midway through the first half but Zaragoza were unfortunate not to get back into the game early in the second period as Jose Mari fired a shot off the crossbar and Helder Postiga had a goal wrongly ruled out for offside.

However, Madrid wrapped things up in the final two minutes as both Michael Essien and Luka Modric scored their first goals since swapping the Premier League for the Spanish capital.

Casillas : Real Madrid Have Nothing To Envy Barcelona