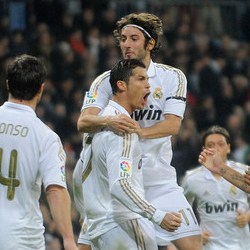 Real Madrid maintained their five-point lead at the top of La Liga after coming from behind to beat Athletic Bilbao 4-1 at the Bernabeu.

The visitors took a surprise lead in the 13th minute when Fernando Llorente volleyed past Iker Casillas at the far post.

Marcelo equalised for Real with a splendid finish before two second-half penalties from Cristiano Ronaldo and a late José María Callejón strike saw off a spirited Bilbao side, who had Oscar De Marcos sent-off.

Brazilian playmaker Kaka was handed a start for Real Madrid. Raphael Varane partnered Sergio Ramos in defence with Alvaro Arbeloa returning to right-back after serving a suspension. Pepe, involved in controversy against Barcelona in midweek, missed the match through injury. Esteban Granero started in midfield alongside Xabi Alonso.

For Bilbao, Fernando Amorobieta moved out to left-back with Jon Aurtenetxe suspended.