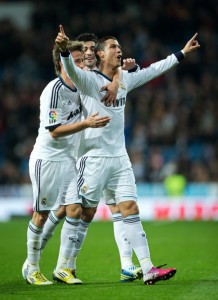 Cristiano Ronaldo warmed up in style for Wednesday’s Champions League showdown with Manchester United by claiming a hat-trick and an assist as Real Madrid crushed Sevilla 4-1 in La Liga.

The Portuguese forward, who became the world’s most expensive player when he joined Real from United in 2009, set up Karim Benzema to open the scoring from close range in the 18th minute at a festive Bernabeu stadium.

Ronaldo doubled the home side’s lead with a powerful left-foot strike from the edge of the area eight minutes later and added his second in the 46th minute after a blunder in the Sevilla defence.

The 28-year-old completed his treble in the 59th minute when he started and finished a swift break to chalk up the 21st hat-trick of his career and his 17th in La Liga.

The Real forward Gonzalo Higuaín was sent off midway through the second half for a second yellow card but it did little to sour the party atmosphere ahead of United’s visit for Wednesday’s last-16 first-leg tie.