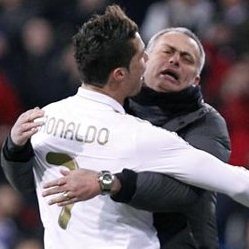 A Cristiano Ronaldo hat-trick helped Real Madrid extend their lead over Barcelona at the top of La Liga to 10 points with a 4-2 victory over 10-man Levante at the Bernabeu.

Gustavo Cabral headed fourth-placed Levante into a surprise early lead, but Ronaldo levelled from the penalty spot after Vicente Iborra had picked up his second yellow card for a handball in the area.

Ronaldo headed Real into the lead and then scored a sublime third before Arouna Kone reduced the arrears. However, Karim Benzema curled in a fourth to make sure of the points.

Ronaldo : I Will Not Watch Any Champions League Games