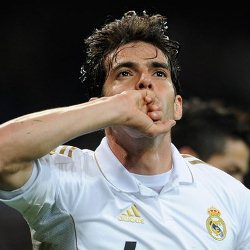 Real Madrid roared to a 5-0 victory over mid-table Espanyol at the Bernabeu to return their lead at the top of La Liga to 10 points.

First-half goals from Cristiano Ronaldo and Semi Khedira were followed up after the break by one for Kaka and a Gonzalo Higuain brace as the league leaders ran riot over the local rivals of their nearest title challengers, and the current holders, Barcelona.

Though Mauricio Pochettino’s side initially resisted stubbornly, heads went down as los galacticos pulled further and further ahead.

And but for the saves of Francisco Casilla in goal for the visitors, the margin could have been even greater than five.

An upset would have moved Espanyol up into the top six, but instead they remain in 11th in the middle of a wide-open fight for European places.