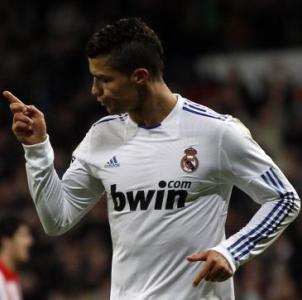 Cristiano Ronaldo scored a hat-trick as Real Madrid ensured they will start next week’s showdown with arch-rivals Barcelona in top spot after seeing off battling Athletic Bilbao at the Bernabeu.

With Barcelona winning 8-0 earlier in the evening Madrid knew they needed a victory to take a one-point lead to the Nou Camp for ‘El Clasico’, and Jose Mourinho’s in-form side made no mistake as they made it seven league wins on the trot.

Ronaldo netted three of the goals – the final one coming from the penalty spot deep into injury-time – while Gonzalo Higuain and Sergio Ramos, with another penalty, were also on the scoresheet.

Athletic, who have a miserable record at the Bernabeu, had made it 2-1 just before half-time through star striker Fernando Llorente but they could make no further in-roads as Madrid – for whom Mourinho was serving the second of a two-match touchline ban – completed a deserved, if slightly flattering, victory.