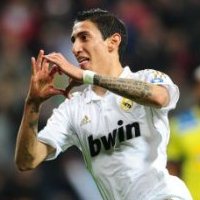 Real Madrid beat APOEL 5-2 in their Champions League quarter-final second leg at the Bernabeu with another convincing victory over the Cypriot side, booking a last-four meeting with Bayern Munich in the process.

Though Real were two goals up at half-time thanks to strikes from Cristiano Ronaldo and Kaka, APOEL pulled one back in an entertaining second half through Gustavo Manduca before Ronaldo added his second of the night with a free-kick.

That sparked a flurry of four goals inside 10 minutes as Jose Callejon got his name on the scoresheet before Esteban Solari scored from the penalty spot for APOEL, but Angel Di Maria’s chip rounded off an 8-2 aggregate scoreline as Jose Mourinho’s team progressed without any problems.