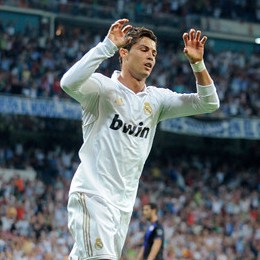 Real Madrid were given a real scare by Rayo Vallecano before running out 6-2 winners in the Liga clash at the Estadio Santiago Bernabeu.

Rayo took the lead virtually from the kick-off and looked good value for their lead, only for Cristiano Ronaldo and Gonzalo Higuain to strike before half-time to put Real ahead.

Ronaldo struck again from the penalty spot soon after the break, only for Michu to score a brace of his own when adding a second goal from close range on 55 minutes.

The visitors’ hopes of achieving a famous result increased when Angel Di Maria was sent off soon after Michu’s second goal, but defender Raphael Varane and substitute Karim Benzema both netted to secure the points on a nervy night for the home side, before Ronaldo completed his hat-trick with another spot-kick.

The win sends Real up to fourth place, one point behind Barcelona and two behind leaders Real Betis.