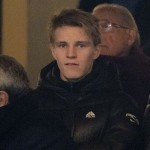 Reports are out claiming that Real Madrid have announced the signing of Stromsgodset midfielder Martin Odegaard.

The 16-year-old midfielder is one of Europe’s brightest prospects, having already represented his country three times after becoming the youngest player to play in the Norwegian Tippeligaen last year.

Several big clubs – including Barcelona, Bayern Munich, Liverpool, Manchester United and Ajax – were thought to be chasing Odegaard, but it appears Real have won the race.

“Real Madrid CF and Stromsgodset Fotball have reached an agreement for the transfer of Martin Odegaard,” said a statement on the Spanish giants’ official website.

“After undergoing a medical exam, the player will hold a press conference with the director of institutional relations, Emilio Butragueno, today 22 January at 1:30pm CET in the Ciudad Real Madrid press room.” Cristiano Ronaldo : Wayne Rooney Will Be Back To His Best!