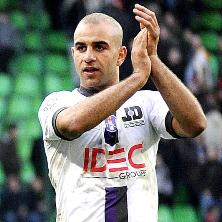 Reports are out claiming that Real Madrid and Barcelona are watching Toulouse defender Aymen Abdennour.

France Football reported that the 23 year-old Tunisia international is being watched by both Spanish giants this season.

6ft 2in Abdennour can play at centre-half and fullback.

The defender has also been linked with a move to Premier League giants Arsenal.