It has been reported that Real Madrid are confident of signing Luis Suarez at the end of this season. 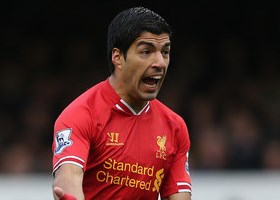 The London Evening Standard claims that Real coach Carlo Ancelotti and president Florentino Perez have agreed that signing the 26 year-old striker is their top priority in the transfer market with doubts persisting over the future of Karim Benzema at the club, amidst interest from Arsenal.

The Italian believes an attacking front three consisting of Cristiano Ronaldo, Gareth Bale and Luis Suarez could be unstoppable and Madrid are prepared to spend up to £45m to complete the dream triumvirate.

High ranking Real Madrid officials are now speaking openly about how convinced they are that Suarez will swap Merseyside for Madrid and are not ruling out a bid in January, although a summer move – tied up before Suarez flies to Brazil before the World Cup – is deemed more likely.