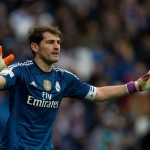 Reports are out claiming that Real Madrid boss Carlo Ancelotti admits Iker Casillas could be dropped.

The Spanish international is under pressure after struggling for recent form.

Ancelotti admits a call for Keylor Navas could now be on: “Keylor might play, equally Casillas could play. It isn’t about singling anybody out.