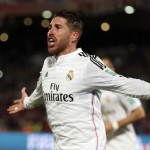 It’s emerged Ramos turned down a new contract offer from Real this week.

“I don’t think that it’s affecting Ramos’ performances. As a player he always tries his hardest, he’s motivated and concentrated,” said Ancelotti.

“I don’t see him dropping off. I see a player who is only growing in stature within the team. I don’t think that it’s something that bothers him.”

The Spanish international is linked with a move to the Premier League with Arsenal, Man Utd and Chelsea interested.