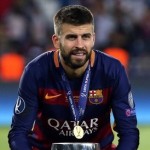 It has been revealed that Real Madrid boss Rafa Benitez has shrugged off the words of Gerard Pique.

The Barcelona defender says he hopes Real will lost every game they play.

Benitez said: “I imagined that you were going to ask me about that. Sport is about bringing people together. I am going to focus on what I have ahead, a game against Espanyol.

“I am not worried about the rest. As Real Madrid manager, I want Real Madrid to win every game and lots of titles. If we win then other sides do not win. Football is about bringing people together, not causing a rift between them.”

Cristiano Ronaldo’s Career Will Be Over in 4 Months?