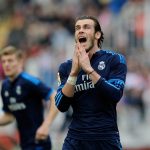 Zidane said: “Like him, I’m very happy because he’s making the difference. We needed Bale to step up, and he did so superbly. He’s been really good and I’m happy because he hasn’t had the minutes and he’s in good shape. Now he must rest up and start thinking about Tuesday. We needed him today and he performed really well.

“We could talk about his part in the two goals, but he put in a fantastic all-round performance. He created chances and physically he gets stronger as the game goes on. He was great.”