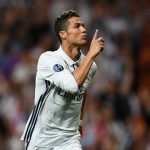 Zidane was asked if the performance of Ronaldo will silence the home fans’ jeers.

“Tonight he showed that he is always there in the key moment.

“He makes the difference. When we need him, he’s always there. He’s unique and we are happy for him and for the team – and for our people who supported us at the Bernabéu.”

On the controversial moments in the game, Zidane admitted: “I spoke to (Carlo) Ancelotti and that’s that. I never get involved with the referee. Anything can happen. I spoke to Carlo but about something else.

“Whether the second booking was right or not or the goals were offside, over the two legs I think we deserved to win the tie.”